Can you imagine a distance of over 4 billion kilometers?  This is the distance from the earth to Neptune, the outermost planet in our solar system.  The planet walk allows the visitor to physically experience these dimensions because it corresponds to a scale, which represents the objects of our solar system and their relative distances.  Starting from the sun with a diameter of 1.24 m in the model, you can walk from the Hakos farm house ‚through‘ our solar system and after 2 km reach the furthest planet, Neptune, at the viewpoint Walter’s Point.  Here, a spectacular mountain landscape awaits you with a view across the escarpment deep into the Namib Desert. 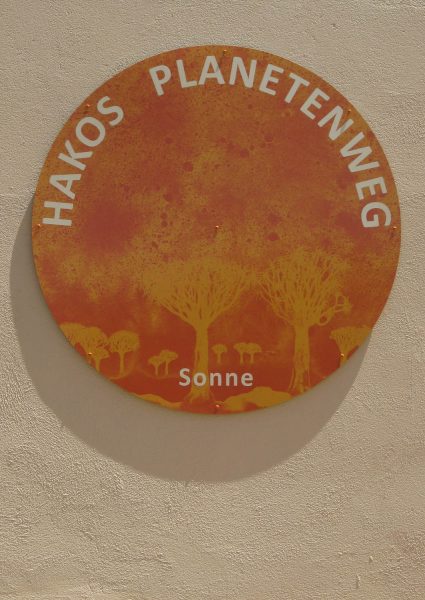 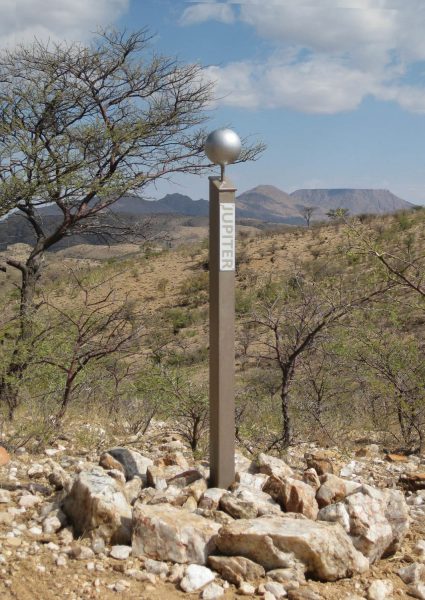 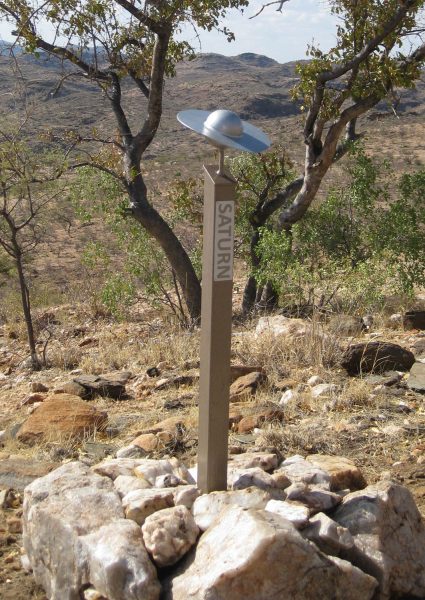 The history and origin of our planet walk began in 2011 (see report below).  Our key criteria in the implementation thereof was that it should be  ‚environmentally friendly … secure from wildlife  … informative … and weatherproof‘.  However, after only a few years, the harsh climate had taken its toll on the first version of the planetary trail, which resulted in the Planet Walk, version 2.0.

A planet walk for Hakos

An article in the local newspaper ‚Allgemeine Zeitung‘ in Windhoek on 10 October 2005 made us sit up and take notice:  there is only one single Planet Walk in Africa, and this was erected in Swakopmund in 2005.  This Planet Walk, however, consists only of concrete pedestals upon which the planet outlines and names are engraved.  On Hakos we wanted to implement a completely different concept, which had already proven itself on the Planet Trail in Freiburg/Germany.  In September 2011 this concept took shape.

Every beginning is hard

But Namibia is not Freiburg.  In the native Black Forest it is rather unheard of that zebras would run over educational boards and posts or baboons playing billiard with planet spheres.  Therefore, careful planning was necessary.  How could the facilities be made safe against wildlife?  Which materials would resist the intense sunlight in Namibia?  Which farm tracks are suitable?

Practical planning began at Pupkewitz in Windhoek, where we met with Friedhelm.  Whatever we had forgotten to purchase in this hardware store had to be improvised on Hakos as it was impossible to drive 270 km for a missing screw.  We were shocked by the costs of wood.  Euro 300 for eight wooden poles was almost unthinkable.  Fortunately, there are only eight planets left as Pluto had been downgraded to a dwarf planet.  In addition there were paints, wood sealer, brushes, screws, metal sheets, cement … so the shopping cart was quite full.

Due to the great likelihood of damage by wildlife, the idea of erecting explanatory panels was out of the question.  Instead, robust posts with mounted planetary spheres and planet names painted on these was expected to withstand the  harsh environmental conditions.  Guests could then take the Planet Information Brochure  to guide them along the Planet Walk.  The emphasis for this new concept was not only to convey the data of the planets (diameter, solar distance etc), but that additional explanations and information would awaken the curiosity and allow the visitor to imagine the vast dimensions of the solar system.  The companion booklet (currently in German only), which is available on Hakos, depicts the Sun and each of the eight planets with detailed information (Figures 1 and 2). This booklet can be downloaded as a PDF-document here.

The Planet Walk would primarily appeal to interested guests without astronomical expertise, who will gain a good introduction to astronomy.  Coupled with a stargazing tour in the evening, this makes for an amazing journey into our solar system and the universe.

In September 2011, I undertook an excursion to Namibia with 20 geography students from Freiburg.  Subsequently, the student Thomas Roßwog returned with me to Hakos to build the planetary path.  Thomas studied physics and geography, had already qualified in precision engineering and was writing his thesis on parabolic solar power plants at the Fraunhofer Institute for Solar Physics.

First, a suitable farm track had to be found on Hakos.  It quickly became apparent that the route to the vantage point ‚Walter’s Point‘ was the most suitable:  the path has a manageable length of 2 km, passes the IAS observatory and is often visited by guests for game viewings.  Also, the endpoint is in eye contact with the farm house, the starting point of the Planet Walk – which is important for the appreciation of distance.  Looking back from Neptune to the farm house, where the sun is, leaves one in awe about the vastness of our solar system.

The path length of 2 km results in a scale of 1: 2.25 billion for the planetary system.  With that the planets shrink to a few millimeters and centimeters – so we decided to double the scale of the planets.  With that, Mercury has a diameter of 4.3 mm, Jupiter 12.7 cm and the sun 1.24 meters (Table 1).  Building a 1.2 m solar globe was not practical.  Instead, a 1.24 m diameter solar disc, mounted on the wall at the entrance to the Guest Farm, points all incoming visitors towards the Planet Walk (Fig. 3).

Ingenuity was needed when it came to the production of the planet spheres. The inner planets Mercury, Venus, Earth and Mars were turned from screw heads by Thomas Roßwog, which also ensured a stable anchoring in the wooden posts (Fig. 4).

The outer planets Uranus and Neptune were made of iron balls, which Walter had found in the attic.  Jupiter and Saturn were the biggest problem because neither the hardware store nor the inexhaustible storage rooms of Hakos offered such large iron balls.  So Thomas sculptured these out of concrete.  Saturn’s ring consists of a metal sheet cast in concrete (figs 5 and 6).  Just as well, Saturn’s 60 moons were not to be reproduced …

All planets were screwed onto 1.5 m high wooden posts, which were anchored in the ground with concrete (Figures 7 and 8).

After only a few years, the forces of wind, weather and animals indicated clear signs of decay.  Some wooden posts had been overturned by zebras, baboons had twisted the planet mountings, the intense sunshine had bleached the colors, and the sharp temperature variations between cold nights and hot days had chipped off the outer shells of the cement-sculptured gas planets of Jupiter and Saturn.  In other words, the Planet Walk had to be renovated with building materials that were less susceptible to weather and wildlife.  The wooden posts were replaced by iron posts and the modeled gas planets by iron balls (Figure 9).  This time we did without a coloured coating of the planets. But where does one find massive iron balls with true-to-scale diameters?  They were not to found in Windhoek.  After an extended search, Uschi Pond eventually found some suitable iron balls in Cape Town. 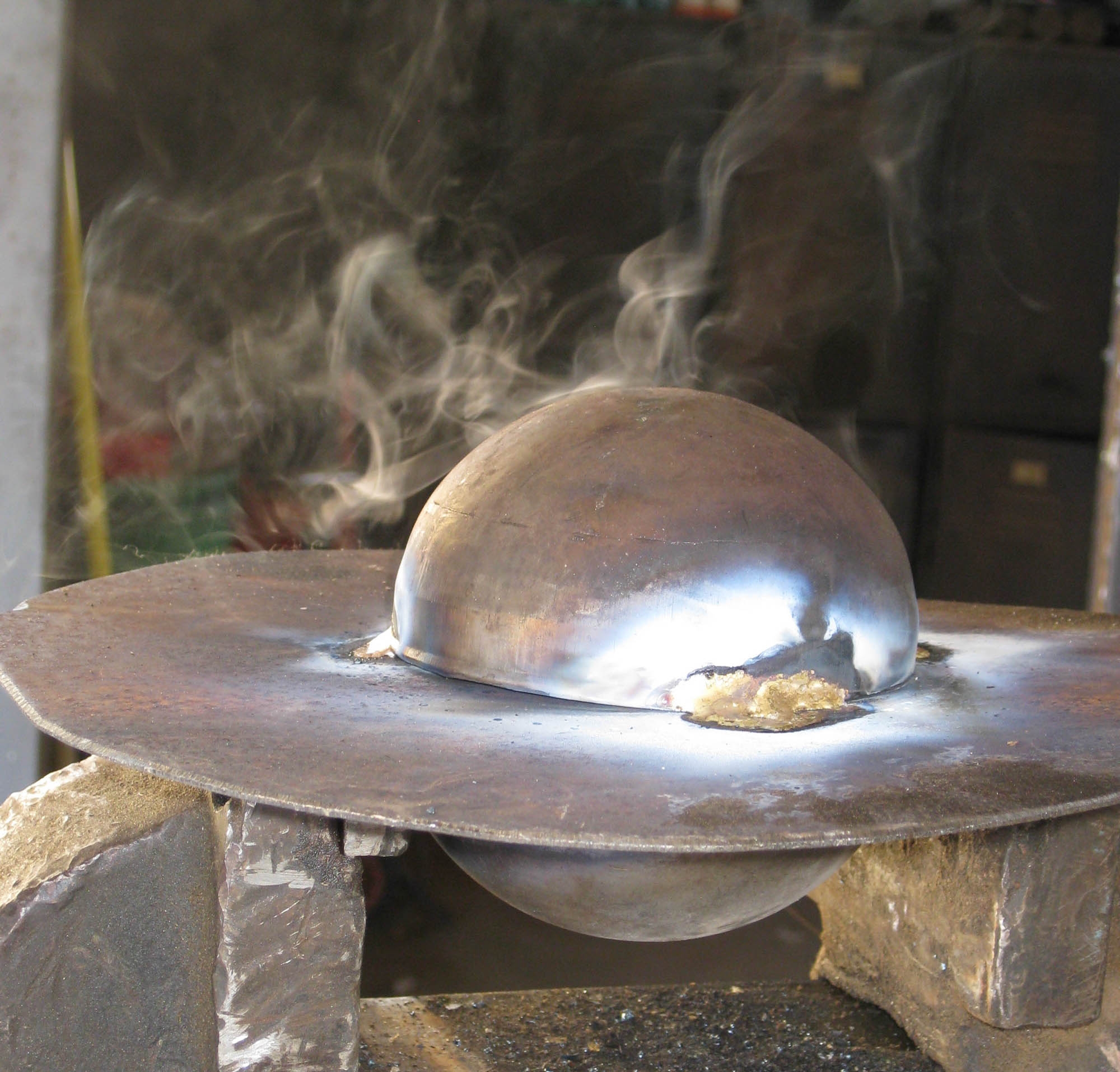 Steaming and smoking … the new Saturn is born in a vice!

The new iron posts with planets were welded by Siggi Straube.  On the 9th of May 2016 the time had come:  In the evening sun Uschi Pond and Elisabeth Straube set off along the Planet Walk with a pick-up, loaded with the 8 planet steel posts, cement, pick axe and shovels. The remains of the old wooden planet posts were dug out and the new steel posts anchored with concrete in the ground (Figure 10).  As a final touch, they laid large white quartzite rocks around the planet posts to prevent zebras from rubbing against these.

Thus the Planet Walk shines again in its full glory.  The hammered paint finish of the gas planets is attractive and weather resistant.  The aluminum plates with engraved planet names on the iron posts are also very appealing.

Due to the welding work, the Saturn ring ended up with a slight curvature.  It now makes a popular photo subject:  a ’selfie‘ with hat (Figure 11).

The design and implementation of the first planetary path took place in September 2011 by the physics student Thomas Roßwog from the University of Freiburg.  Determined, dedicated, employing great craftsmanship and many practical ideas, Thomas ensured that the planetary path on Hakos became a reality in only 10 days.  The Hakos team Walter, Waltraud and Friedhelm supported the project with valuable advice, active help and covered the costs.  Christian Dombrowski, a freelance journalist and member of the Sternfreunde Breisgau in Freiburg, kindly granted permission to utilise his texts from the ‚Freiburger Planetenweg‘ (www.freiburger-planetenweg.de), adding to the content and didactic part of the Hakos Planet Walk.  Siggi, Uschi and Elisabeth renewed the Planet Walk in May 2016.

I express my gratitude to all the above persons and hope that the Planet Walk will bring joy to many guests on Hakos for many years to come, and continue to carry our shared hobby of astronomy forward.